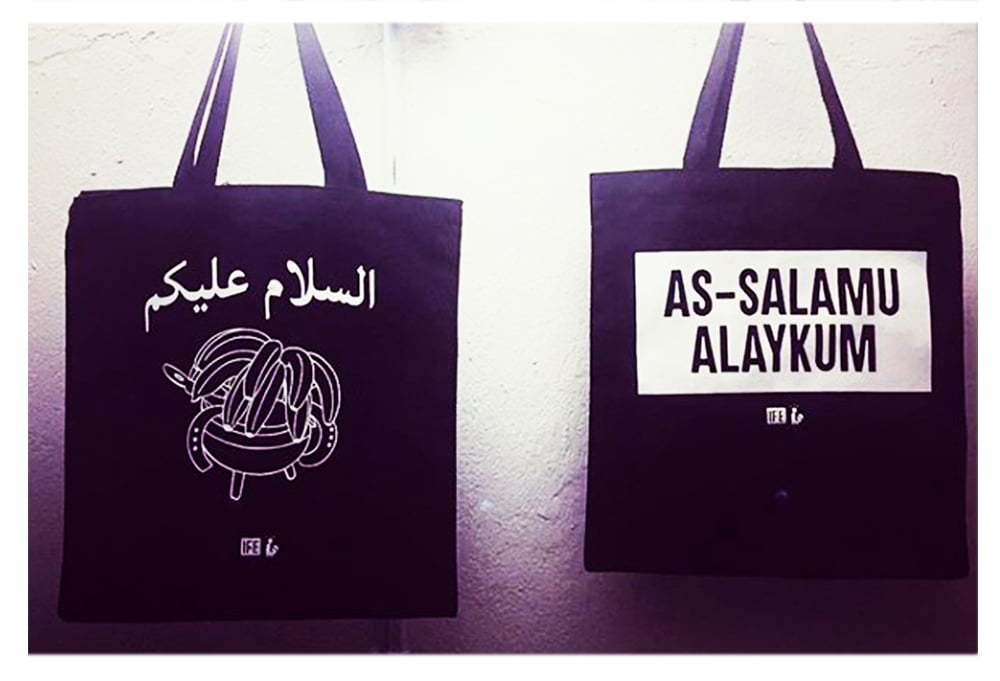 Designed by ÌFÉ's Otura Mun and featuring commissioned artwork by Dallas Texas' Will Rhoten (aka DJ Sober) the BANGAH TOTE builds on ideas laid out in John Coltrane's A Love Supreme and ÌFÉ's own BANGAH (Pico y Palo). The thick black canvas tote carries the AS-SALAMU ALAYKUM message in block text on one side with the identical message in Arabic lettering on the flip. Both sides were hand drawn by Rhoten. The tote was printed by local San Juan printing press Transom and shipped to our Discos Ifá offices from Transom's printing press in Santurce, Puerto Rico.

"While writing the material for ÌFÉ's album I was inspired by an episode of DemocracyNow! where panelists were talking about the revolutionary language and speech of the 1960's. I started to think about words that I'd like to see youth from this generation incorporate into the everyday sort of speech you hear in the street at any given moment in time. I always liked the way that peace had a sign in the 1960's, and in the 90's we used to say "peace" when we hung up the phone or moved on to the next spot. In the same way I've always felt that the sentiment and the message conveyed in the Arabic greeting "Peace Be Upon You" was one of tremendous beauty. In many ways I feel the simplicity of it's universal message resonates deeper and more profoundly than ever. Revolutionary love. Love as the foundation for revolutionary change" - Otura Mun | ÌFÉ